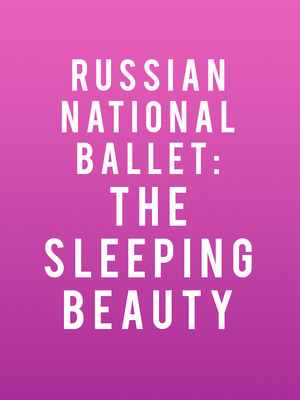 Don't miss the return of the esteemed Russian National Ballet as they present Tchaikovsky's glorious iteration of The Sleeping Beauty. Founded in the 1980's, the RNB were one of the first companies to combine traditional Russian Ballet with the new found creativity that came with freedom from the Soviet Union. Now numbering over 50 dancers, an RNB performance is a truly transporting, lavish spectacle for all ages.

ONCE UPON A TIME

On the day of her grand christening, the Princess Aurora is admired by all in the kingdom, including a cast of fairies, ready to imbue her with the virtues she'll need in life. But one fairy is left off the guest list- the evil fairy! Furious, she bursts into the hall and curses baby Aurora, wishing her to die upon her 16th birthday, after pricking her finger on a spinning wheel. But all is not lost, the strong Lilac fairy, while not able to undo the curse, can adapt it, and instead Aurora will sleep...for 100 years...

When the time comes, the Lilac fairy bewitches the whole realm into sleep, joining Aurora in her sentence, as vines and trees grow up around the palace, hiding it from view. Finally, Aurora's saviour, Prince Desire arrives and plants on her true love's kiss, waking the Princess and kingdom just in time for a jubilant and triumphant wedding ceremony!

Sound good to you? Share this page on social media and let your friends know about Russian National Ballet: The Sleeping Beauty at Niswonger Performing Arts Center - Greeneville.